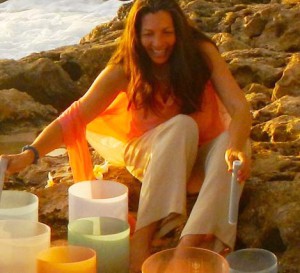 Leigh Ann Phillips is an award-winning singer songwriter and sound healing educator. She is on a mission to merge sound and music to assist people in leading more fulfilling lives in healthier bodies. Her work is taking her all over the world and back again.

Leigh Ann has developed a method of brainwave entrainment through the use of her voice and the quartz crystal singing bowls. It is a form of sound healing based on research on the brain as well as the musical system called the Circle of Fifths. The purpose of the work is to help people release emotions from the body, as well as raise the level of health and well being physically, emotionally, mentally and spirtually. She has developed a method of shifting and slowing the brain states, allowing people to not just relax but release emotional blocks that are allowing dis-ease in the body. Her method incorporates the use of the quartz crystal singing bowls, Tibetan singing bowls, tingshaws, harp, piano, herbal medicine as well as her voice. Using mantras in languages such as Sanskrit, Enochian and Aramaic, Leigh Ann incorporates ancient mantras and prayers to enhance the power of the sound. This method actually places the bowls on the person, so the person is receiving not just music and sound, but also vibration.

Her passion is to assist people in building an awareness of consciousness to the mind, body and spirit. Some people would call this allowing sound and music to be a bridge to the soul.

For years, Leigh Ann owned and operated the Dragon House Sound Sanctuary in Crestone, Colorado, presenting workshops, retreats, personal sessions, concerts as well as teacher trainings. Recently she has moved Shimmering Sounds LLC to the island of Oahu, living with her sweetheart and family outside Honolulu, Oahu, Hawaii.

Since her move to Hawaii, Leigh Ann has been bringing sound healing and the music of the quartz crystal singing bowls into the mainstream. She has given demonstrations and sound healing sessions most recently in Taiwan, the Hawaiian islands, at the Gem Exhibit at the Smithsonian Institution in Washington, D.C, as well as at a Playboy event in the Los Angeles area. She has also made television and radio appearances on various health, and lifestyle programs in Hawaii, New York, Massachusetts, Colorado, New Mexico, as well as the Orient. 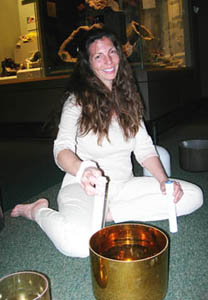 The sound and the music have merged, and Leigh Ann’s passion for life has sounded into a path where music can bring not just beauty, but health, peace and the evolution of the soul.

Leigh Ann’s latest recorded album release, Mik’ael (2013), is a musical tapestry of mantras, sung in the Enochian language, accompanied by quartz crystal singing bowls and world instruments. Mik’ael is a musical collaboration with writer and producer, Thomas Barquee, recorded at Zenden Studios in California. Ideal for yoga and meditation, Mik’ael is a healing offering to the Archangel Michael, and all that is peaceful in nature and ourselves. Her next recording project will be spoken word, co-created again with Thomas Barquee.

She is also the Executive Director of The Shimmering Sounds Foundation, a 501(c)3 non-profit organization dedicated to bringing sound healing as a complimentary therapy to the masses. The foundation has given hundreds of free sessions to people that could not normally afford holistic health sessions.

The foundation incorporates the use of the John of God crystal bed as well, a complementary treatment to the sound using color, vibration and light.

Currently she has developed her own line of quartz crystal singing bowls, using unusual gemstones to infuse the bowls, as well as etching ancient mandalas that amplify the intention of this sacred art through the power of the sound.